just over a couple of weeks until the Brighton Marathon, should've been working harder today but mind drifted back to my last date with "Mary"...

Gave it everything I had, and came home with one of these bad boys, which I'm sure you'll agree is a lovely piece of race bling...


...day started early in the grounds of Osaka Castle where the race started, 30,000runners made the morning scene look like an invading army laying siege. Walking to my start gate I was in a crowd of several hundred runners passing through the gates into the inner bailey of the castle, a stunning but really quite unusual way to get to the start line.

Stopped for a dump along the way, but hadn`t considered the likelihood of the loos being Japanese and not Western (elementary mistake)...
...squatting over one of these was not the early morning stretch my quads were expecting...thankfully, given the consistency, I banished the Gingerbread Man before he even got started, unfortunately I couldn`t flush him away, should have apologised to the next chap in the queue, but elected to run away quickly instead using the burst of speed as a pre-race warm-up.

The Marathon
Race got off to a great start, to be honest felt great for the first 30km per the street markings, run was through streets of Osaka with big crowds at every step offering their support. Saw my family and Japanese relatives at 1km, 10km and 13km which was great and gave me a big lift each time - couldn't miss the Union Jacks fluttering in the breeze, and certainly not my 9yr old son dangling from various lampposts along the route with 2 flags and no obvious way of hanging on.

Thought I was on pace for sub 4 clicking along at around 9:02/9:03 but given my Garmin at the end read 26.88 that could already have been too slow in reality, wouldn`t have made any difference though. Ran a very steadily paced 20miles through the heart of Osaka having a super time, was hot and humid, but not too bad having run in 30+ temperatures over the summer.

Slowed down over last 10km, just didn`t have it within me to hold the pace any longer, but didn`t drop "too far" and I never stopped. Ran every step of the 26.2/26.88 miles which was my big issue post-Brighton back in April in my debut where I fell apart at 16miles and ended up run/walking the last 10, couldn`t get beyond the fact I hadn`t "run" the marathon.

With 3miles to go there was a monster bridge to get up and over, hell on the legs and mind, but stuck to it and although I could have happily given up at any point from there onwards I didn`t. Picked up the pace with 1km to go, then saw the family again 500m or so from the finish, increased pace once more then turned the final corner saw the finish and managed to pull out a "sprint" finish.

Wonderful experience! Great crowds throughout and friendly runners along the way.

4:10:57, a PB by more than 22mins smashing apart my debut in April - could`t really ask for much more and certainly could`t have given anything else on the course.

Interviewed by biggest daily newspaper in Japan after the race, got my medal and goody-bag then met the family. All impressed that I "just walked out" of the finishing area rather than being in pieces like Brighton. The big increase in mileage this time has definitely made a big difference. 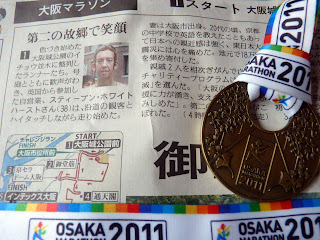 Really enjoyed the training for this marathon and the support from the DailyMile community has been stupendous. Family are great, but its such a big help to have people that actually know the daft things you are putting yourself through 5 times per week.

Got back to the inlaws and headed straight to the local public bath, spent opening 10mins in an ice bath much to the irritation of the local yakuza who wanted it after the sauna, would`ve been happy to share, but they obviously didn`t like the look of me! Post bath had a feast of sushi at the local restaurant which father-in-law had hired in entirety - a top night, to round of a great day!

Very happy with this marathon, this is the experience I wanted/expected/anticipated in Brighton. wasn`t sub4 but always thought of that as a stretch goal that was worth aiming for, really wanted to get under 4:15 and ideally within 4:10, so extremely happy with this run.

Brighton 10km in a couple of weeks so a chance to try just hammering it, then soon be time to start it all over again and train for Brighton v2 in April 2012. Can I go faster again?

Thanks for the support and encouragement along the way everyone, couldn`t have done it withouth y`all 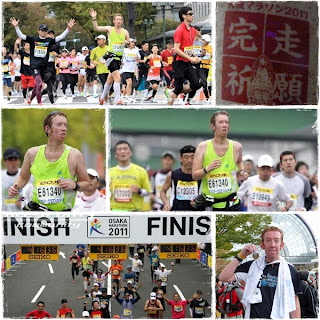 Other Ways to Donate